From Breeches to Coveralls
The History of Finnish Police Uniforms

This online exhibition, "From Breeches to Coveralls – The History of Finnish Police Uniforms", offers a detailed presentation of how police uniforms used in Finland have evolved from the Swedish era to the present. The exhibition features paintings and photographs of uniformed police officers from different time periods as well as photographs of uniforms preserved in the collections of the National Police Museum. The exhibition includes a chronological presentation of the history of police uniforms, but also separate texts on coats, headwear and other parts of the uniform.

Older Finnish police uniforms were similar to uniforms worn by other civil servants. The first uniforms specifically designed for the police were introduced only in the 19th century, and the focus of this exhibition is on the uniforms of this period onward. Of particular interest are the changes of the 20th century, driven by political considerations at the beginning of the century and an increasingly active search for comfortable and practical uniform items during the later decades.

From 1900 onward, the uniform statutes were included in the Code of Statutes of the Grand Duchy of Finland, the name of which became the Finnish Code of Statutes following Finnish independence in 1917. This online exhibition includes the original Finnish statutes for reference. Drawings of articles of uniform clothing and insignia are often featured.

The police uniform is much more than a set of clothing. How the uniform should be put on, how it should be worn, how the uniformed officer should behave in specific situations, and how various kinds of equipment should be carried forms a culture of its own. This exhibition discusses the very centre of this culture, the uniform itself, and how legislators have sought to influence the uniform throughout its history.

Finnish law enforcement uniforms prior to 1861

History of the uniform 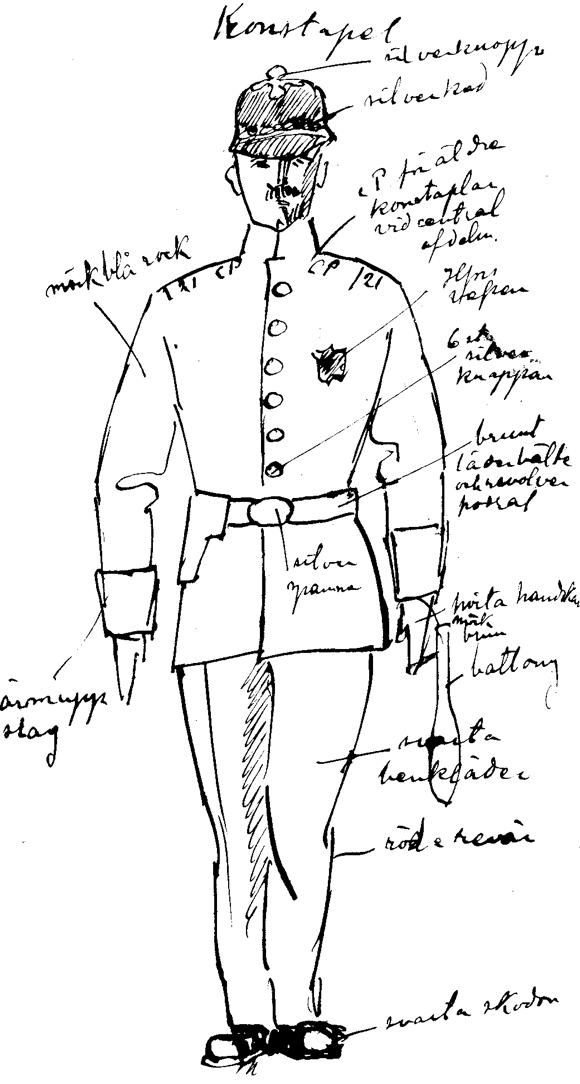 The police uniform is not an ordinary set of clothing, and consequently, there are a number of both written and unwritten rules pertaining to its use. Those not accustomed to wearing a uniform may make various mistakes. In order to help new police recruits avoid such mistakes, the following pictures were used during training organised by the National Traffic Police in the late 1950s and early 1960s. The pictures demonstrated how to wear a uniform properly and how to behave and not to behave while wearing it in public. The message is simple: The uniform must be carried with dignity - not like this!
© Poliisimuseo 2016